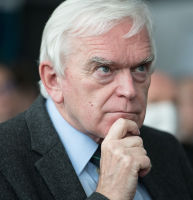 Institute of Physics of the CAS, Czech Republic, EU

Position: Head of Group "Materials with Controlled Microstructure - MCM" at the Institute of Physics of the CAS, Czech Republic, EU

At the METAL´22 conference, Prof. Pavel Lejček will present the lecture at the Session E Non-Ferrous Metals and Alloys.

Professional Background:
Prof. Pavel Lejček has received his M.S. degree (1973) in Physical chemistry at the Institute of Chemical Technology Prague (CZE) and PhD. (1983) in Physical metallurgy from the Institute of Physical Metallurgy of the CAS, Brno (CZE). In 1996 he has received a DSc degree from the Czech Academy of Sciences (Brno, CZE) in the field of Technical Sciences. He became an Assoc. Prof. in the field of Materials Chemistry and a professor of Metallurgy in 2005 (both at Institute of Chemical Technology, Prague, Czech Republic).

His professional career started at the Institute of Solid State Physics, CSAS, Prague, (now Institute of Physics, Czech Academy of Sciences) in 1973, where he was a researcher (from 1982) and from 1987 he led the Laboratory of Crystal Growth, department of Metal Physics. In the period 2000 - 2016, he was a head of the Division of Condensed Matter Physics. From 2016 to the present he is a visiting Professor at Kumamoto University, Kumamoto, Japan.

Activity in the last five years:

Membership in Research Societies and Councils